History of the partnership

‘Art Brought to Life’ (2009-2011) was a partnership between schools in Finland, Germany, Hungary, Spain, Turkey and the UK. The partners initiated intercultural dialogue between young people from European countries and promoted from a European perspective an awareness of the role of art, sport, history, drama, literature, music, history of art and ICT in communication. In this way the partnership allowed people to broaden their idea of art while allowing art to broaden their idea of people and brought culture into pupils’ everyday life.

In the partnership students introduced themselves through the eTwinning platform. They chose a national piece of art as a stimulus to be sent to a random country in the partnership and then they created a response (a dance, a play, music, etc.) with the help of local artists. The students also created a new piece of art based on their own stimulus, before comparing the outcomes. Students shared their pieces of art in workshops in a festival during the exchanges. In the festival they were split up into groups from different countries to develop a creative project around a specific art form.

The partners from Finland, Germany and Turkey were unable to collaborate on any future projects.  Instead, in 2012 there was the first contact with our new German partner school, IGS Bertha von Suttner, during an Erasmus+ teacher-training programme in Cheltenham, UK.

Our four schools planned a further project, ‘Innovate to Create’, that ran from 2015-2017. It was a creative learning project, pushing and testing new ideas around performance and interdisciplinary work within schools, inspiring disadvantaged students to re-engage with their learning and fulfil their potential, and experimenting with digital technologies and performance relevant to the 21st century and jobs in the creative and cultural sector.

After the successful completion of this project, partnership invited Almby Skola, Örebro, Sweden, to join, and developed the idea for ‘Innovate to Create II’ as a companion piece to our earlier Erasmus+-funded project.

Innovate to Create I

Websites for the partner schools: 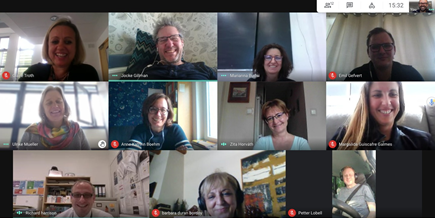